We are suppplier of Moringa oleifera from Indonesia.

Moringa oleifera is the most widely cultivated species of the genus Moringa, which is the only genus in the family Moringaceae. English common names include: moringa, drumstick tree (from the appearance of the long, slender, triangular seed-pods), horseradish tree (from the taste of the roots, which resembles horseradish), ben oil tree, or benzoil tree (from the oil which is derived from the seeds). It is a fast-growing, drought-resistant tree, native to the southern foothills of the Himalayas in northwestern India, and widely cultivated in tropical and subtropical areas where its young seed pods and leaves are used as vegetables. It can also be used for water purification and hand washing, and is sometimes used in herbal medicine. 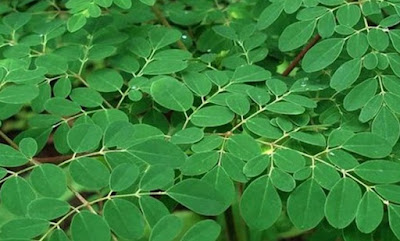 Many parts of moringa are edible, with regional uses varying widely: 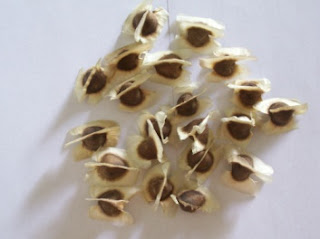 The leaves are the most nutritious part of the plant, being a significant source of B vitamins, vitamin C, provitamin A as beta-carotene, vitamin K, manganese, and protein, among other essential nutrients. When compared with common foods particularly high in certain nutrients per 100 g fresh weight, cooked moringa leaves are considerable sources of these same nutrients. Some of the calcium in moringa leaves is bound as crystals of calcium oxalate though at levels 1/25th to 1/45th of that found in spinach, which is a negligible amount.

The leaves are cooked and used like spinach and are commonly dried and crushed into a powder used in soups and sauces.

Drumstick vegetable pods at a market
The immature seed pods, called "drumsticks", are commonly consumed in South Asia. They are prepared by parboiling, and cooked in a curry until soft. The seed pods/fruits, even when cooked by boiling, remain particularly high in vitamin C (which may be degraded variably by cooking) and are also a good source of dietary fiber, potassium, magnesium, and manganese.

Seeds
The seeds, sometimes removed from more mature pods and eaten like peas or roasted like nuts, contain high levels of vitamin C and moderate amounts of B vitamins and dietary minerals.

Seed oil
Mature seeds yield 38–40% edible oil called ben oil from its high concentration of behenic acid. The refined oil is clear and odorless, and resists rancidity. The seed cake remaining after oil extraction may be used as a fertilizer or as a flocculent to purify water. Moringa seed oil also has potential for use as a biofuel.

Roots
The roots are shredded and used as a condiment with sharp flavor qualities deriving from significant content of polyphenols.

Malnutrition relief
Moringa trees have been used to combat malnutrition, especially among infants and nursing mothers. Since moringa thrives in arid and semiarid environments, it may provide a versatile, nutritious food source throughout the year. Moringa leaves have been proposed as an iron-rich food source (31% Daily Value per 100 g consumed, table) to combat iron deficiency. However, further study is needed to test practical applications of using this dietary source and its iron bioavailability.

Moringa is a plant that is native to the sub-Himalayan areas of India, Pakistan, Bangladesh, and Afghanistan. It is also grown in the tropics. The leaves, bark, flowers, fruit, seeds, and root are used to make medicine.

Moringa is also used to reduce swelling, increase sex drive (as an aphrodisiac), prevent pregnancy, boost the immune system, and increase breast milk production. Some people use it as a nutritional supplement or tonic.

Moringa is sometimes applied directly to the skin as a germ-killer or drying agent (astringent). It is also used topically for treating pockets of infection (abscesses), athlete’s foot, dandruff, gum disease (gingivitis), snakebites, warts, and wounds.

Oil from moringa seeds is used in foods, perfume, and hair care products, and as a machine lubricant.

Moringa is an important food source in some parts of the world. Because it can be grown cheaply and easily, and the leaves retain lots of vitamins and minerals when dried, moringa is used in India and Africa in feeding programs to fight malnutrition. The immature green pods (drumsticks) are prepared similarly to green beans, while the seeds are removed from more mature pods and cooked like peas or roasted like nuts. The leaves are cooked and used like spinach, and they are also dried and powdered for use as a condiment.

The seed cake remaining after oil extraction is used as a fertilizer and also to purify well water and to remove salt from seawater.

How does it work?
Moringa contains proteins, vitamins, and minerals. As an antioxidant, it seems to help protect cells from damage. 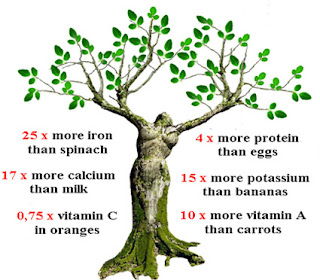