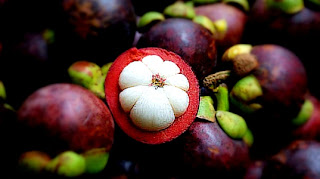 Japanese scientist demonstrated that six Xanthones from pericarps of Mangosteen all displayed growth inhibitory effects on human leukemia cell lines. And also alpha-mangosteen would be a good canditate for prevention and treatment of cancer and tumors.
Research in China, foiund that Mangosteen Xanthone dervative garcinone E has potential use in treating cancer, cytotoxic effects on liver, gastric and lung cancer cells.
In Thailand, research found that pericarp or rind of the Mangosteen has potential for cancer chemo-prevention.
Microbes and Virus.
Scientist in Sri lanka extracted Xanthones from the root bark, stem bark and latex or skin of Mangosteen and found that it contains more than 75% of Xanthones strong antibacterial, anti-inflammatory, antifungal and otehr biological properties.
In Japan , alpha mangosteen has a strong ability to against Staphylococcus aureus(caused meningitis,pneumonia and septicimia) that have become resistant to antibiotic such as penicillin, flucloxacillin, oxacillin and even vancomycin.
In Thailand, found that Xanthone have a strong effects against Mycrobacterium tubercolosis.
In Singapore, found that Mangostin and gamma-mangostin has an ability to inhibit the activity of the HIV-1.
LDL.
Research in Australia found that Xanthone can protects the LDL from oxidative damage caused by free radicals that can leads to heart disease.
Anti-Inflammatory.
Japanese scientists at the Tohoku University found that gamma-mangostin, a Mangosteen Xanthone derivative, has potent anti-inflammatory effects on the brain's structural cells and suggested that it has the potential in helping with inflammatory conditions of the brain (for example,Alzheimer's disease). The scientists proved that gamma-mangostin inhibited the activities of COX-2, an enzyme that plays a major role in the development of inflammatory conditions.
In a follow-up Mangosteen research study performed by the Japanese researchers from Tohoku University, the scientists suggested that gamma-mangostin would be a new useful lead compound for the development of anti-inflammatory drugs.
Central Nervous System.
In a study, Japanese scientists found that gamma-mangostin is a 5-HT2A receptor antagonist in the central nervous system, which indicates its potential in helping with depression and other anxiety states.
Skin Infections.
Mangosteen researchers in Thailand studied various medicinal plants on their ability to inhibit the growth of acne-inducing bacteria, and found that Mangosteen had the greatest antimicrobial effect.
Their research's results indicated that Garcinia Mangostana (Mangosteen) possesses a strong inhibitory effect on Propionibacterium acnes and Staphylococcus epidermidis, and noted that Mangosteen would be an interesting possibility as an alternative treatment for acne.

We can supply mangosteen for your utility ( export )